Today I ran the 3000m time trial with the College of St. Scholastica Nordic ski team, then I learned that the Bangin' In the Brush trail run. It was interesting to experience these events with only 90 minutes separating them. Both were quite fun but the atmosphere was quite different.

The 3k tt was run on a track with aspiring young athletes looking to make their mark in the first test of the season. As we warmed up there was small talk but it felt forced. The tension came from nerves that would only relax after the race had begun and all that was left to do was run. There were no awards, and few competitors. Everyone ran for the team, their goals and bragging rights. It began without ceremony, and being a small field there was little of the jostling one usually experiences while racing on a track. The race lasted minutes, each step measured a precise distance over the track bringing the races closer to the finish. After 7 and half laps of spikes clawing into the track, and runners digging to the depths of their will power to post the best time they could the race was over. There was no fanfare, no crowds, only the marching band preparing for tonight's big game. The only person paying attention to these athletes was their coach, busily writing down times as each person crossed the line. As everyone filed across they shook hand gave their post run comments and or excuses then everyone filed off to grab a drink and cool down. The mood most decidedly different, relaxed if not light hearted. Then everyone jogged back to campus to prepare for the strength testing.

After completing the time trial Andre' Watt and myself, traded our spikes for trail shoes and headed up the North Shore to Korkki Nordic to run the 27th annual Bangin' In The Brush, a tradition I had not had the opportunity to participate in before today. As we pulled into the parking lot we were greeted with people chatting dogs pulling on their leashes and children playing. Everyone was enjoying the beautiful fall day. It felt like the summer never really came to Duluth. There were people of all ages milling about waiting for the festivities to begin. When they did so it was with a promptness that was not expected from such a relaxed event. It all began with the kids race, either one or two laps around the field. This was followed by cookies and ribbons for all participants. The cookies are why everyone is here, at least that is what everyone claims. All the racers then gather around the porch of the chalet to hear the pre-race announcements. In a nutshell, be careful, the course is rough at best, aptly described as a portage to put it into perspective for those that had not heard the legends of the race. With that the race began with only a handful of people rubbing elbows in the front line. After a lap in the field the 100 competitors ran into the woods for a grueling race with sketchy footing at best. As the race spread out there was lots of time to reflect on the pain caused by the long climbs and rolled ankles. Bangin' In The Brush is probably the slowest race in the area, the approximately 11.5k was won in just over 40 minutes with a competitive field. After the pack thinned all that was left were the trees, the uneven footing and the sweat dripping into your eyes. Then after the 'big hill' it was mostly down to the finish, a relief after the grueling run up to that point. After each racer crosses there is a smile and usually a friend standing nearby tells them they should have finished sooner, because that guy right in front of you did. This being laughed off returns the situation to its pre-race state, relaxed and carefree. There is no one talking on there cell phone because there is no service, no rushing to work because you can't miss the door prizes. After all everyone is here for the cookies. After everyone is finished the awards, the cookies everyone is waiting for can begin. It should be known that these are no ordinary cookies, they come from the Positively Third Street Bakery. Every year I take two bags of cookies on a trip to Colorado, here they are quite valuable. One bag gets a week of free lodging in Vail, a short walk from the mountain. The other is eaten on the way out so I am sure to have the first bag when I arrive. Yes, these cookies are worth the wait, even for just a chance to win a bag in the door prizes. After the festivities have concluded the crowd slowly disperses, some to the lake for a swim and others begin the return trip to Duluth on their bikes. 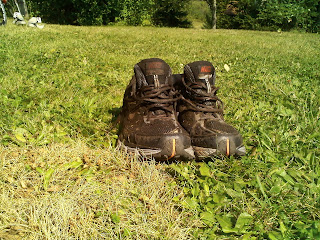