This past week I was lucky enough to attend the USOC’s International Altitude Training Symposium. The opportunity to listen to some of the most renowned researchers in the field was pretty awesome! The presentations were a mix of hard science and practical experience from coaches, researchers and other practitioners. Speakers included Dr. Levine and Dr. Stray-Gunderson, researchers that first experimented and found the efficacy of living high and training low. Some of these presentations were quite technical but they have led to improved performance because of their practical significance.
When I arrived at the symposium on Wednesday afternoon I ran into one of the U.S. Ski Team coaches who I have known from racing in the Midwest. Not only was it nice to see a familiar face, it was great to catch up with him and talk about how coaching at the international level compared to his past experiences at the club level. I also ended up sitting by one of the coaches that I met in Buffalo at the USAT Coaching Summit. The three of us spent most of the three day symposium together. It was really neat to be able to compare the different models used by triathlon and skiing to produce great Olympians. I kind of felt like a mediator because I had the most insight into each but the people I was with were definitely more versed in the intricacies of their respective sport that I so it was great to be be able to learn from each of them.
At this point in the game I am a fan of the skiing model. There was a great presentation by the Nordic combined coach and a few of the members of the combined team. They not only discussed how they use altitude but the structure of their team. The residence program they have in Park City creates a team environment that fosters competition and camaraderie that creates champions, as was exemplified in Vancouver. The success of the Nordic combined team at these Olympics was previously unimaginable. They are also using a different periodization model than I have seen in other ski programs; while this is an important part of their success I believe that the team atmosphere created by the residence program allows this model to be successful.

I have heard that more business takes place on the golf course that in the office. This after hour’s business was demonstrated at the symposium. Each day at least one of the presentations contained the phrase “last night we were discussing this during dinner and…” While the only golf course I saw during the symposium was abandoned, which is a good thing because golf is not my strong suit! Each day after the symposium everyone went out for dinner. The first night the group I was with ran into a contingent from USA Speed Skating. It was interesting talking to them about the differences and similarities of speed skating and skiing. I also met people from swimming as well as a couple of coaches from Spain and Brazil. 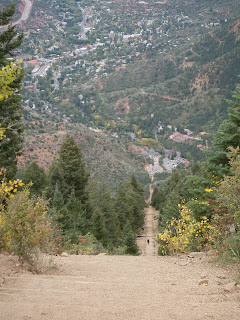 After the symposium concluded on Friday a few of us went to the incline. The incline is a one mile hike that gains 2000 feet over that distance! It was a pretty sweet experience made better by great company. The hike up was quite challenging to say the least but once at the top there was a great view of Manitou Springs and Colorado Springs. Instead of hiking down, which I have been told is quite taxing, we took the Bart Trail down which is a four mile trip. It was a great conclusion to an awesome few days!