This weekend got off to a great start. After driving up to Duluth Wednesday night I headed to the Ridge Thursday morning to help wax for Duluth East Nordic. Luckily the temperatures did not change much because it was already tricky enough without having to guess what the temp would be at race time. The even better part was we nailed it! On a tough day we had great skis, fast and sticky all at the same time. At one point on the course while I was testing it was easy to look around and see that I was the happiest coach on the trail! The great wax helped but the both the boys and girls skied great races. Both teams were just ahead after the skate race and solidified their victories with a solid performance in the classic. While the girls were expected to be in the mix the boys came into State ranked 5th so they pulled off an 'upset' to those who underestimated them. It's funny because after being in the cities every coach I talk can't impress upon me enough how difficult their section is but when it comes down to it Section 7 has been a dominant force almost every year. It was great to see Duluth East win the boys and girls titles for the third time (of the six times it has happened). 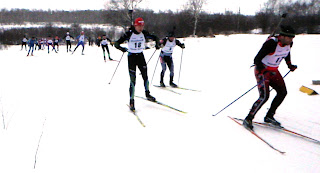 After the excitement at the State meet I stayed up north and coached with the Duluth/Cloquet CXC Master's Chapter. We had an excellent ski Saturday at Snowflake Nordic Center. The course was quite fast but much more skiable than I had anticipated. As always the volunteers did and excellent job grooming. After the ski I headed to Carlton for the Trampled by Turtles Concert. Having never been inside Black Bear Casino I was surprised to be engulfed by a cloud of smoke when I stepped inside. Luckily the conference room did not allow smoking. The concert was awesome! Trampled has put on a great show every time I have seen them. Their skill on their instruments is hard to beat. They play at tempos that are extremely fast but never miss a note! 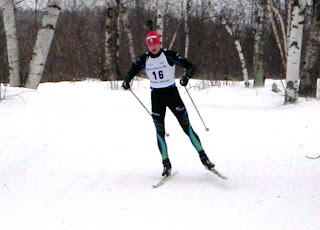 During the session with CXC on Saturday I heard there was going to be a biathlon race at Snowflake Sunday. I decided to dust off my rifle and give it a whirl! Luckily for me it was quite windy on Sunday. This is a huge advantage if you haven't shot your rifle in three years. After the first shooting Phil Rodgers and I were in the lead. During the second shooting Phil left the range quicker than I did and was about a penalty lap ahead. On the third shooting we came into the range for our first standing shooting. It was next to impossible for me to keep my sights trained on the target. The gusts were blowing my whole body around! Phil kept his lead and I knew I would have to hit at least one to catch him in the next shooting. During the next lap we both came to the conclusion that it was better to just shoot fast and get on with things instead of waiting for a good shot. I cam into the range just as Phil took his first shot. During the quick succession of shots that followed he managed to hit one. I fired quickly and missed all five as Phil clinched the win. 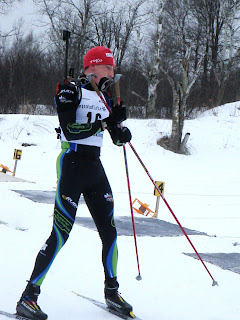 After the race I headed to Cloquet for another session with the CXC Master's. There was an excellent turnout! We had a great ski in the wind and twigs that had blown onto the trail. After skiing and talking about the Birkie for a few hours we parted ways and I headed into the blizzard that was engulfing the Twin Cities. Luckily I made it to Forest Lake before it got really bad. All in all it was a great weekend of waxing, coaching, racing and hanging out with friends and family!
Posted by Jason at 7:18 PM No comments: