After a long trip on the bus ninety skiers including myself safely made it to West Yellowstone, Montana. On the way we saw twelve cars in the ditch. One of which was one group from St. Olaf. I was extremely happy to be riding the bus! After a slow night of traveling we make it to West in just under 24 hours after we left Duluth.

On our first night a few of the adults and I decide to go out for pizza. On our way there we were pulled over by the overzealous WYPD for jay walking and not walking in single file! We almost talked ourselves into a ticket but more about the police later. We finally made it to Wild West Pizzaria. Its reputation of best pizza in the west is well deserved!

From Thursday to Tuesday West Yellowstone has gotten four feet of snow! Yesterday we were experiencing a true blizzard. The two roads in out of town were both closed. The streets were lined with stranded semi's. With up to 30mph winds and heavy snowfall it made for some exciting video technique sessions. As I walked to the trail head with the CXC Masters we had our second run in with the WYPD. We were yelled at for 'obstructing traffic' which meant that there were four masters walking side by side with one truck following us. The police SUV was in the oncoming lane with his lights on and started yelling at us for our inconsiderate behavior.

Today when I woke up it was negative 17 degrees. By the time I skied it warmed up to negative 4. It was the first day I was able to ski more than 1km from the biathlon range! I met up with some of the CSS guys and skied Windy Ridge.

I have yet to check out the Mexican restaurant that is located in the school bus. It has to be good because it looks so sketchy! I will hopefully get to eat there before we leave on Friday.

I will put up some pictures later in the week. It is hard to take photos of the same landscape that I have photographed for 11 years!
Posted by Jason at 4:38 PM No comments: 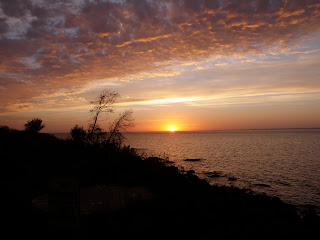 When working races in Duluth you get to see some beautiful sunrises!

Lots has happened since my last post, but that is to be expected when it was in March! This fall I have started school at the University of Minnesota, Twin Cities. It is a much different experience than that of St. Scholastica. The reasons for this are the size of the institution, the courses, and living in a large city. While I enjoyed my undergraduate experience immensely I am glad to get another perspective on my field of study. The U of M has such a large variety of course offerings it makes the curriculum very specific for what I want to do. At the same time I am very glad to have such a strong background in physiology. If I didn't have that I think I would spend all of my time trying to catch up and understand the material instead of being able to apply it to sport and endurance performance.

Enough about school. This fall I have been racing a few of the cyclocross races in the Minnesota circuit. They are super fun for anyone that has not experienced them. It has been fun riding my bike regularly again. That hasn't happened since I was in high school! A key aspect of sport specific training is when you change sports to change the mode which you train for them. Until this fall I have dabbled in triathlons and a few mountain bike races but have never seriously ridden my bike. 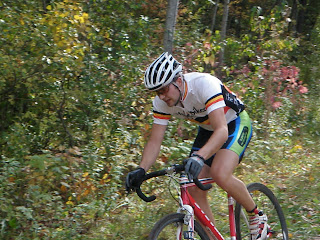 The final weekend of October brings us to the Halloween Hustle. This year it was an even bigger success than it was last year. With a 50% increase in participation and many more elaborate costumes it was a fun morning. Luckily it was a beautiful day for October in Duluth. Eric Hartmark posted the top time for the men, and Amanda Lepisto for the women. For the costume contest the winner was a ghost that would have passed for an actress in a Steven King movie. In second place there were some very scary clowns, and in third was Captain Underpants. For photos and results visit www.superior-performance.net. The most inspiring scene of the day was the participant that completed the 5km course with Cerebral Palsy. He is an inspiration to all that were there. In the world of sport we get wrapped up in faster, higher stronger and tend to forget there are those that do not have a choice when it come to being their best. They are required to go to extraordinary lengths to accomplish the tasks that most of us take for granted. Thanks to all that participated. A special thanks goes to all the volunteers and sponsors, without you the race would not have been possible! 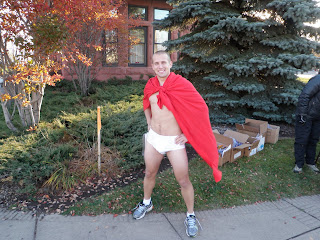 After the race my attention was turned to pumpkin carving. With only a few short hours until Halloween myself and a few friends broke out the knives for the 10th Annual Pumpkin Carving Party Contest. There were many brilliant pumpkins (and watermelons). After the carving was completed the judges chose the Vikings helmet as the winner. The artistic license that was taken by the watermelons was also awarded! Miraculously for the first time in 10 years nobody burned the pumpkin seeds- I guess it helps to have them cooked by a professional. 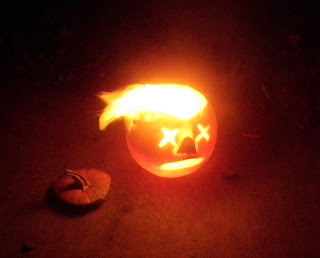