Thanksgiving was a great time this year. It always is but this year is especially awesome. It began with a drive to Vail for opening day.  I arrived the Thursday before Thanksgiving to surprisingly little snow. On Friday the mountain looked a little bear and it would be a madhouse with everyone there for the first day of the season Kristen and I decided to head to the Nordic center. It was the first time I had gone cross country skiing in Vail. There were some bare spots but it was all in all a great ski! Getting on snow the first time of the is always a little shaky but it was fun to get out. We spent the rest of the day walking around Vail Village. That evening we headed over to Minturn for some live music.

On Saturday I continued my journey north. As I left Vail it began to snow. This seemed to be a trend for most of the drive. About an hour north of Vail I encountered a semi that had rolled over and was across the entire road!  At this point in the road The cab was hanging over the guardrail and we had to drive on the shoulder to get around the accident. The drive remained snowy until I reached the interstate. On I80 the road cleared up a bit until I was 3 miles from my exit where the road was closed! After I left the freeway I headed north again up to Jackson, WY, from this point until the far side of Teton Pass the drive was beautiful!  At the the top of Teton Pass there were lots of cars parked and people skinning up the mountain. The snow looked amazing! The drive continued uneventfully until I was 60 miles outside of West Yellowstone when it started snowing hard. The last few miles took about two hours to drive but I made it. The best pert is that there was some warm Wild West pizza waiting! 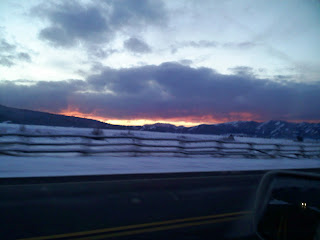 The week of Thanksgiving was filled with skiing, coaching and catching up with friends and family. It is always great to spend that week in West because EVERYONE is there. I am especially lucky because I get to spend the holiday with my family. The week turned out to be one of the most beautiful weeks I have ever spent in West Yellowstone, warm and sunny with plenty of snow, it doesn't get any better than that. We had some great coaching sessions. All the athletes were excellent, they made great progress technically while getting in some great volume over the week. It is amazing for them to be able to have the opportunity to spend an entire week focusing on training. I remember how great that opportunity was when I was in high school. The amount of work that goes into the trip behind the scenes is astounding. The trip leaders and parents that accompany these athletes do a great job making sure the kids are able to not only have a trip but an affordable trip which is equally as challenging. 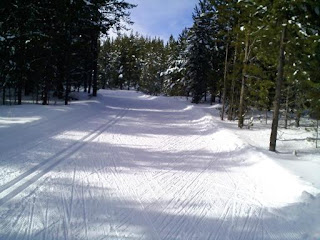 After a great Thanksgiving dinner I headed back to Colorado Friday morning. Instead of heading straight back to the Springs I went to Steamboat Springs to spend some time with my cousin Fred and his wife Penny. It was great to see both of them and see the sights of Steamboat. Fred and I went backcountry skiing on Rabbit Ears Pass on Saturday and Sunday with Buster. Both skis were great. I also got to see Howelson Hill, the home of the Steamboat Springs Winter Sports Club. It looks like a great facility. Alpine, jumping, cross country all housed in the same location. They even have a weight room  on site. Not only does it look like a sweet facility it works.  This club has produced 79 Olympians! The number only becomes more impressive when Steamboat Springs' population is 12088. Saturday evening Fred, Penny and I went to the hot springs just outside of town. It was awesome!  Looking up through the steam and seeing the stars was sweet. Luckily we were able to stay on our feet because the areas around the spring were treacherous with all the ice on the ground. 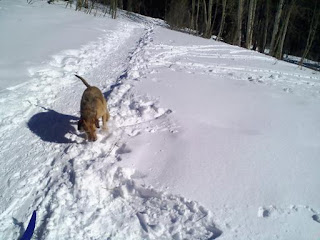 After a great trip I headed back to the Springs. It was tough to come back to the lack of snow, but it was good to be home.
Posted by Jason at 1:37 PM No comments: